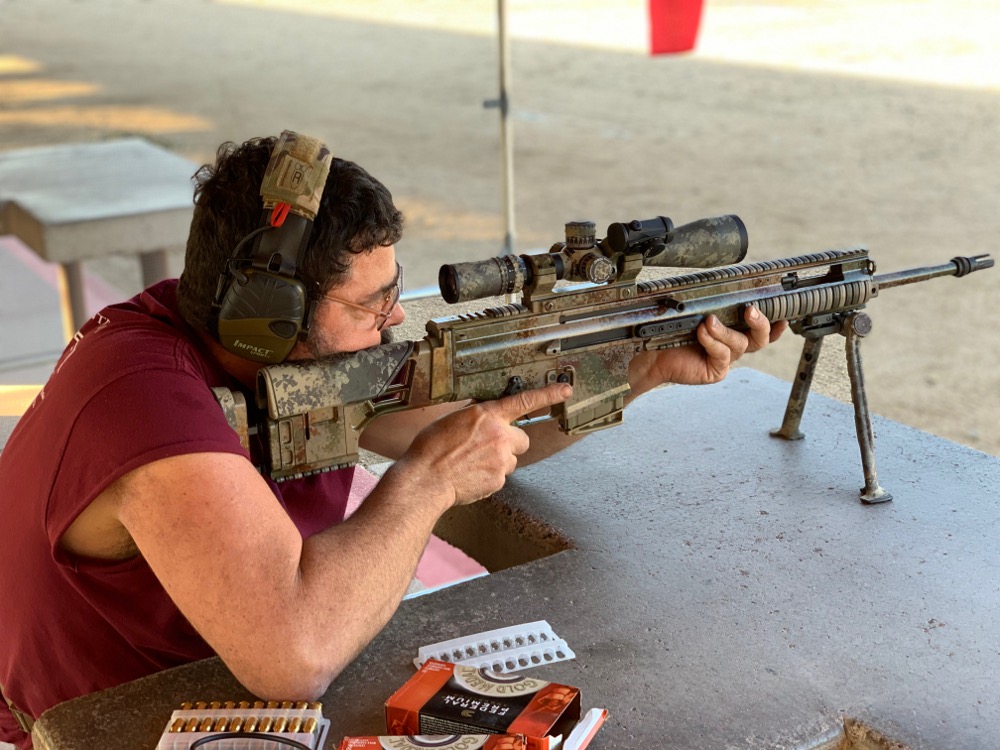 Introduction
Ordered a SCAR 20 a while back and it finally came in. So of course I needed a scope for it, and a better scope than the Nightforce 2.5-10 SHVs I have on the three SCAR 17 20″ So I ordered a 3.5-15 NXS from Optics planet before finding it $50 less direct from Nightforce off Amazon. Hmm. That sucks.

I had this scope before and regret selling it, but it was on a Rem 700 “sniper” I replaced with one fo the SCAR 17s. If I could do the scopes on the 17s over again, I’d have gotten the 2.5-10 NXSx24. But they don’t offer this model in the SHV line and the NXS are twice the cost of the SHV. But in retrospect, I think it fits the rifle better. Supposedly the difference is not in the glass, but in the tube – the NXS having a heavier duty body. I don’t know. The quality of both is excellent and I can’t discern a difference. I love the MOAR reticle, and on the NXS they are illuminated.

Mount is an AmDef I had on hand, that was on one of the 17s. That 17 is getting a Larue, so all three will be the same.

Initial impression of the rifle – it’s a heavier barrel than the 20″ 17. The adjustable stock is aluminum so the balance remains good. It comes with the Geissele trigger. Also comes with the Hogue rubber grip, which I hate. So I put an A2 grip on, and ordered a Magpul MOE modified grip from Parker Mountain Machine. Not in yet. Came only with one 10rd mag. And the box was bigger than a 17 with foam instead of carboard packing.

I had a spare set of the Magpul selector levers which I prefer to the factory. I’ve tried several others and the Magpul feels the best to me. It is also the cheapest around $12.

The entire fire control group looked like someone had given it a long spray with white lithium grease. The reason escapes me. The Geissele doesn’t need it, and it’s not protecting anything. Just a mess to clean up.

I had previously refinished a friend’s 17 in ARS Geckoflage and one thing I noticed was how difficult it was to get the inside of the rails clean. Even with the ultrasonic cleaner, it was difficult. I figured if I was going to refinish it, I should do so now – so I did. Base coat was FDE, and I almost did the whole rifle in that single color. It was a close match to the trigger housing, and with the anodizing on the receiver more bronze than anything else, it was quite pleasing to have a uniform color. But I went ahead and did the camo. Three color – FDE, brown, green, and then sea-sponge blending of the three.

I should point out that there is nothing FN or anyone else can do about the wide variation in coloration with a (Grade 3) hard anodizing in “FDE”. Apparently, it’s just the nature of the process to get a wide range of color. It doesn’t bother me as I tend to camo all my rifles.

I know the trigger housing can handle 250F. curing, but I was unsure of the rubber cheek piece and the two side rails, so I did those in Krylon. Cured all the Aluminum at 300F. and the trigger housing at 250F. Also coated all the miscellaneous parts (except bolt carrier) in Metacol III gray as it’s better corrosion resistance than the black oxide or Parkerized factory finish.

On disassembly, I noted that one of the rail’s threaded inserts was crooked, and one of the buttplate arms was loose. They do not use lock washers on the hex bolts, which I found curious. I get it for attaching the front of the stock to the plastic mount, because the elasticity of the plastic contributes to locking the front bolts, but the rear ones are steel to aluminum, so I think they should have a split washer or something. Not impressed with the QC.

The gun had been fired, as evidenced by the carbon in the gas chamber, but I would expect any reputable company to testfire a gun before shipping. The barrel was heavily coated in a thick oil – not quite Cosmoline, but it took an hour in the ultrasonic to get it off.

Got it reassembled and scope mounted (along with my Aimpoint Micro). Adam commented that the three trunion bolts (each side) looked uneven, at which point I remembered I hadn’t torqued them yet and would have forgotten (rushed for time). Using my Seekonk 62 inch pound torque, I corrected that.

First round fail to cycle. My fault, still had gas plug in suppressor mode. Impact high and slightly left. I made an elevation adjustment and then way too much windage adjustment and in the wrong direction (duh) Putting second round way left. Overcompensated to the right for round #3. Round 4 was close enough that I did a 5 round string.

Round 5 short-stroked. I had the rifle resting on my range bag and although I don’t believe so, it is possible that the charge handle hit the side of the bag.

Round 10 failed to lock open on the empty mag. Which makes me doubt there was any obstruction in the previous short-stroke.

Out of the box, this rifle has insufficient gas pressure. Now I did refinish it and the receiver was not soaked in oil (bolt and carrier still had heavy factory oil). But really, there is no excuse for a rifle like this to fail to cycle, even if bone dry. The action was smooth. There is no such thing as “breaking-in”. There is only operates as designed and out of spec. So a big F to FNH / FNUSA. For a $4500 MSRP (and no, I didn’t pay that), there is no excuse. I will have to research which gas port orifice it has.

I made a slight adjustment to windage and then 10 more rounds into the square target. 2.6″ extreme spread. The cease fire in 1 minute timer had just sounded, so this was 10 rds in 1 minute. Not exactly rapid fire, but certainly not wasting time.

At this point I should point out, that while competent I am not a super marksman. I am typically a 1.25 MOA shooter even if the rifle and ammo are capable of more. So expect that the equipment can do better than I can get out of it.

Ran out of time and did not test with silencer mounted

Overall, I like it. It balances well. I am not pleased with the failure to cycle properly. I will keep track of this and see if it recurs – if so I will consider replacing the orifice with a larger one.

I had a spare troy rear sight which I have since added, and ordered a front sight.

Third group was with FGMM 168 g – 10rds. I jerked the trigger twice and called those. The other 8 rounds were 1.9″ This has seemed to be a pattern among the three SCAR 17s I have – it just does not shoot FGMM any better than ball. And the Privi match was far worse than ball. I want to investigate match ammo in the 150g range, although the 1-12 twist should be fine for even 175-180g.
SCAR 20 Initial Impressions 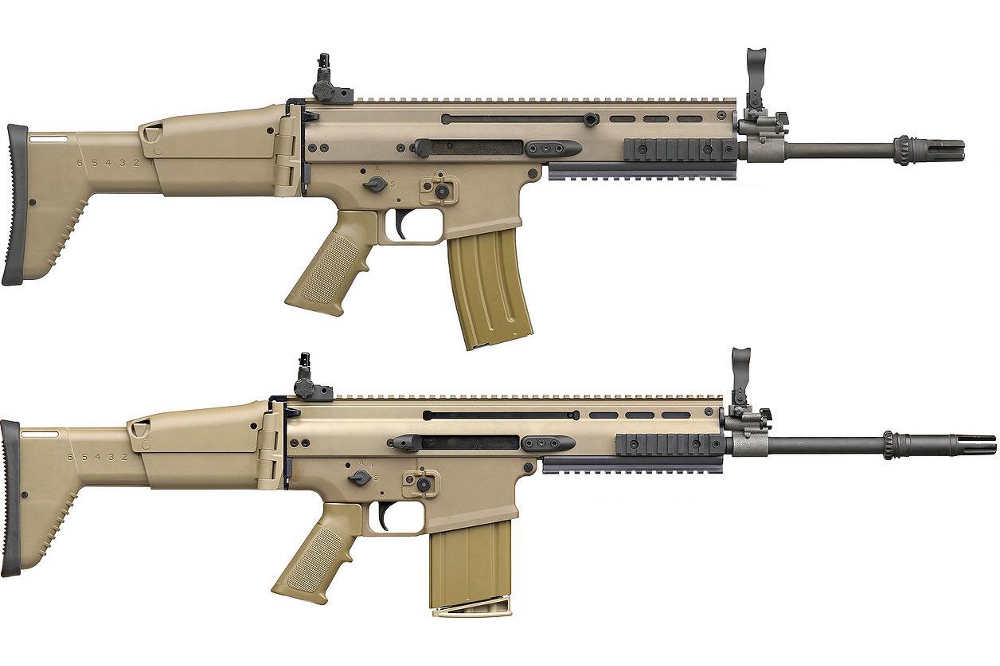