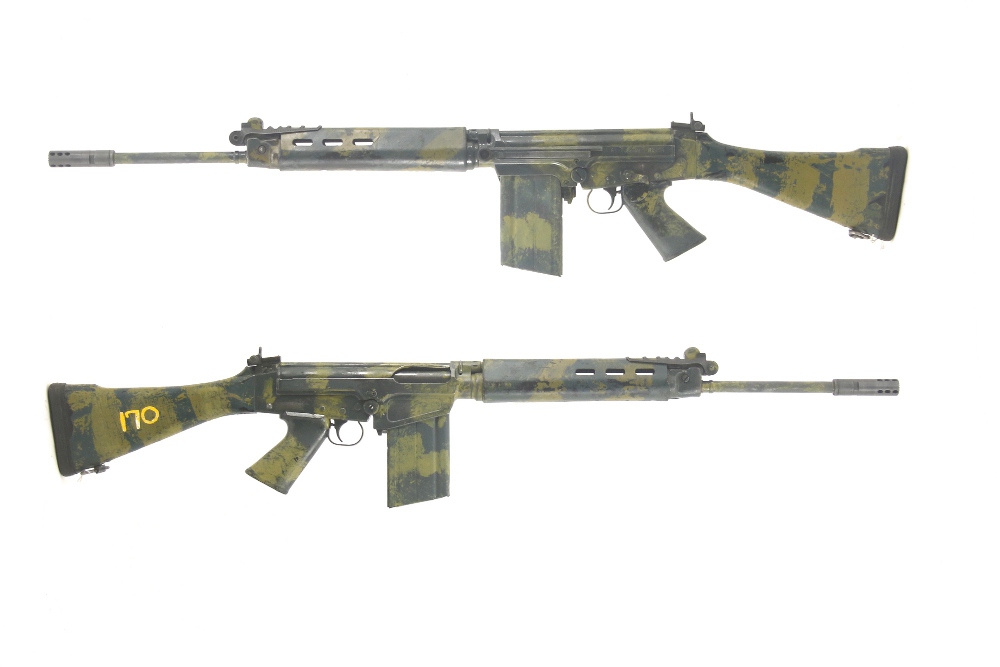 The popular story behind camouflaged South African rifles, is that captured ANC rebels noted that the black rifles were identifiable at a great distance. This motivated the military to begin camouflaging the rifles. The colors were taken from their vehicles. A blue green, and and a yellow-tan, commonly called “baby poop”.

Surplus rifles from South African, Rhodesian, and Zimbabwe often display remnants of this finish. Those who wish a representative sample of a rifle that saw service in these bush wars, may wish to duplicate this finish style.

I can do it for you. Fee is the same as for METACOL III Satin Black. If you wish to do it yourself, here are some tips.

There are some who attempt to morph a new camo finish into the remnants of the old one. I find this problematic. It is difficult to build a rifle with new parts on a new receiver and artificially wear just the new parts to match the wear on the old. One ends up with parts that all show wear, but the wear does not look natural.

Many of the original parts will show significant rust. Rust is bad. Many of the parts are damaged. Damaged parts need to be repaired, often involving sand-blasting, soldering and/or welding.

The first thing I do is to photograph the original parts to keep a general idea of the original finish, then I sandblast everything to bear metal. Then I make any necessary repairs, build the rifle, and Parkerize (South African) of black over park (IMBEL contract) the rifle. Then I reassemble and begin the painting and distressing process. This insures that the finish is inconsistent and the wear patterns duplicate actual handing fatigue.

After a couple years, the hardening agent is no longer working in my old color pattern of Glidden from Home Depot, and Home Depot no longer carries oil-base alkaloids.

My goal this time was not for a custom color mix, but to find a standardized color that was a good match. Others have done color-matching with Dupont automotive colors. I have commercial accounts at both Sherwin Williams and Dunn Edwards, and I was happy with what I found at Dunn Edwards.

I have a pair of South African handguards where the paint dripped inside the handguards and was protected from wear, so I had a “virgin” color to start with. It’s a little lighter than the oil and dirt-stained finish on the outside, but I think it’s a truer match for what the color looked like new. When I distress it, it should balance out.

Parts kit after repairs, ultrasonic cleaning, assembly, blast and park. This is a South African manufactured rifle and the typical finish is Parkerizing. The rifles that came from Brazil via Chile (circumventing the Apartheid-era arms embargo) are black paint over Parkerizing.

A Parkerized rifle and a painted rifle awaiting the camouflage. While there is no “correct” configuration, there are some features more typical than others for a FAL.

Slop paint on with a 1″ brush. The sample on the right had an atypical tan, as well as a medium green. The medium green is simply a mix of the baby-poop and the dark green. There is no set pattern, but typical is one with wide bands.

While the paint is still tacky, I wrap it in plastic, handle it roughly, then rip the plastic away. This pulls some of the paint off. The rifles were also touched up over the years, so for a more complex pattern, one might paint it, peel it, let it dry, then paint it a second time a little bit differently. Distressing the second soat of paint will reveal the other color underneath.

After removing the plastic, let the paint dry. I found two days to be necessary to get the finish hard, but I was able to work with it a little bit after 12 hours. Flash hiders were not painted, as it would prevent the rifle grenade from fitting.

Now it’s time to disress the finish. I used a variety of methods, including 220# and 320# sand paper, a fine steel and brass brush, and solvent to remove the finish entirely from high wear areas. In this example, I’ve just applied the rack number over the distressed finish, but still need to scuff up the rack number. I’ve seen rack numbers in red, green, and white.

Since the rifles were still bone-dry, I dunked them in my oil vat. I waited an extra day just to be sure the oil didn’t remove any of the paint. Thes images show a little bit of sheen from the oil and the camera flash, which will dry eventually

For those wishing to add rust, the bare metal parts can be wiped with bleach which will cause a patina to form. It must be thoroughly rinsed when the desired effect has been obtained. 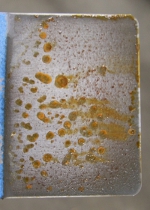 For those wishing to add rust, the bare metal parts can be wiped with bleach or diluted pool acid, which will cause a patina to form. It must be thoroughly rinsed when the desired effect has been obtained.

These test plates demonstrate the progression. I started with a Parkerized carbon steel plate, and scuffed it with steel wool I then wiped it with bleach and let it sit for about 15 minutes. Then I rinsed it, snapped a photo, and then repeated the process. The final one has been rinsed and oiled. 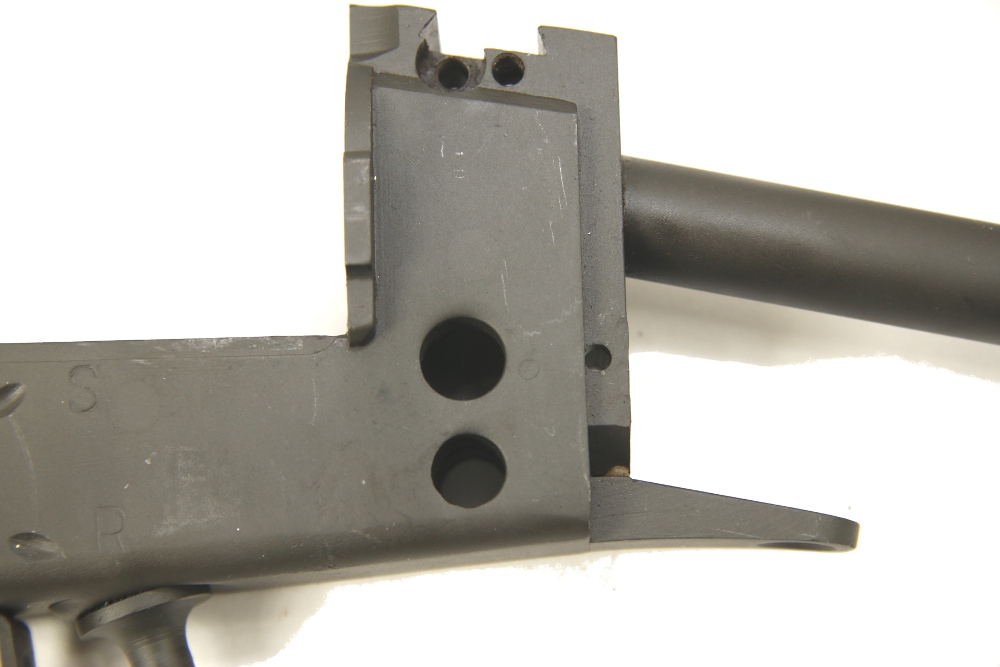 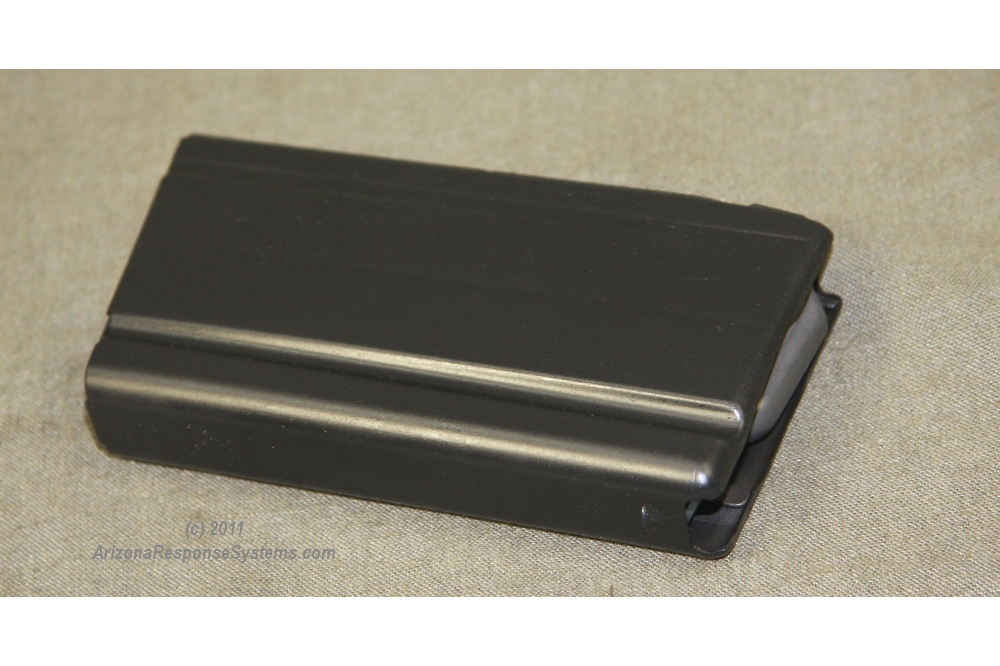 (updated 04-09-2020 Repairing FAL Magazines. In the past, FAL magazines were priced at a level that 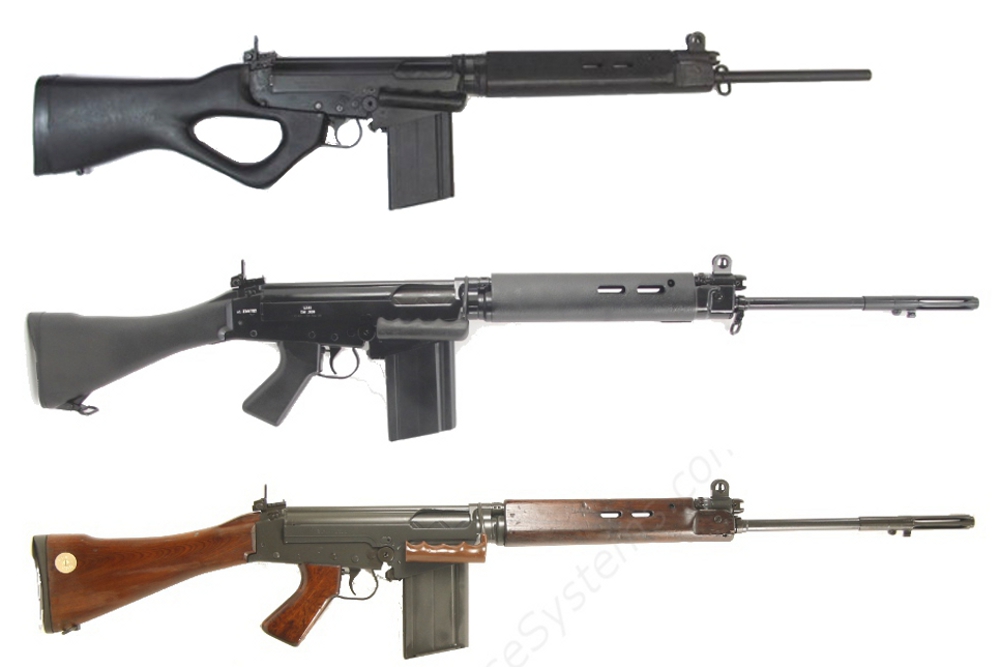